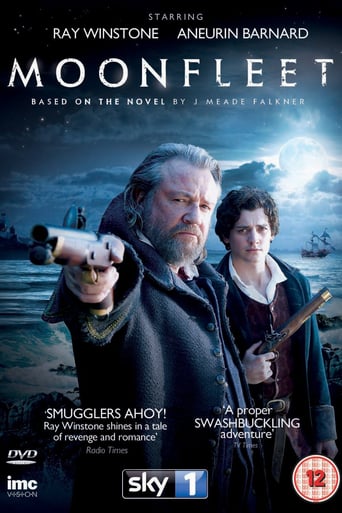 Ray Winstone leads a gang of smugglers in our brand new family drama, Moonfleet. Written by Ashley Pharoah (Life on Mars, Ashes to Ashes), this two-part adaptation of the much-loved John Meade Falkner novel is set in the small Dorset village of Moonfleet. In the story, young John Trenchard (Aneurin Barnard - The Truth About Emanuel, The White Queen) is desperate to join the local band of smugglers led by Elzevir Block (Winstone - The Departed, Hugo, Snow White And The Huntsman). Together they embark on an adventure full of action, friendship, and humour, and hunt for a fabled lost diamond. Their journey takes them from 18th Century Dorset, to the jewellery quarter of The Hague, and on to a gripping, final sea voyage. Newcomer Sophie Cookson joins the cast as John's first love, Grace, who is also the daughter of Moonfleet's anti-smuggling magistrate, Mohune, played by Ben Chaplin

BootDigest Such a frustrating disappointment
Moustroll Good movie but grossly overrated
Stevecorp Don't listen to the negative reviews
Console best movie i've ever seen.
garry1949 This film has the appearance of being poorly financed and badly produced. The love angle between John Trenchard and Grace Mulhoon is as realistic as that at the sharp end of Titanic! John Trenchard should be portrayed by a sallow youth, yet Aneurin Barnard is plainly a grown man in his late 20&#39;s - Totally miscast. Barrels of brandy being carried off the beach are plainly empty. Muskets fired at some 30 yards from their targets by professional solders would have been lethal. Hangings were not carried out round the back of a building but were great public affairs, usually carried out on public holidays for the entertainment and instruction of the masses. Thousands could be expected to attend, not half a dozen yokels with straw hanging from their hats. Even the professional acting qualities of Phil Daniels and Ray Winston cannot rescue this one.
B Hartigan I am not a professional reviewer and would normally not endeavour to add my thoughts to a public forum, however I felt so strongly about this that I felt I had to pipe up.I was really excited to see the advert for this adaptation on Moonfleet on Sky over Xmas as I am a lifelong fan of the book. I was however a bit perturbed that there would not be enough time to define the characters and plot sufficiently over 2 episodes. But I was determined not to be put off as I had been surprised in the past by Sky&#39;s delivery of treasure island, I waited with anticipation for the day when Moonfleet would be shown.Sadly within the first few scenes, as soon as I heard the magistrate refer to himself as Magistrate Mohune and not Magistate Maskew as he is properly known, I knew that severe artistic license had been taken.The middle was a mish-mash of scene jumps attempting purely to try and cover each chapter in the book as quickly as possible without explaining hardly any of the thought processes of the characters.There was absolutely no time given to establishing the nature of the contrabandiers (right word??) or the peril experienced at the local beach. No history of previous ships being wrecked and attempts to save poor souls from the beach, making the ending completely lack lustre.add to this that fact that they skipped that part where John and Elzevir spend 10 years plus in a jail / work camp in Holland, and you can see how the integrity of the book is completely destroyed.the worst part was the completely faked ending of John throwing the diamond into the sea, completely ignoring how the book actually ends.I realise that you can only cram so much into a TV show, however this could have been done so much better over three or four episodes.Couple this with a generally weak cast and acting presence and I was left Sadly Disappointed. I didn&#39;t even think Ray Winstone did anything to lift the experience, not matching that character of Elzevir Block at all.As another reviewer has said, I wonder if anyone associated to this production has ever read the book?I gave it four out of ten as the cinematography was quite good and my kids who have not read the book (although I have recommended that they now do so) quite liked it meaning that for the uninitiated it might have been a passable bit of Xmas TV. Sadly not for me.
BlueLightAlarm When I heard that Sky were making this as an Xmas special I was very excited but after watching it I am left very disappointed. The story felt so rushed that at times I wasn&#39;t sure if I was watching the actual feature or a trailer with all the action and none of the story. There was no time to build the characters or properly explain what was happening and I think that viewers who are not familiar with the book will be left confused. This could have been twice as long and should have been in order to tell the story properly. Whoever is responsible for this mess deserves no less than Blackbeard&#39;s curse!
DrDFox This recent version reunites Ray Winstone and Phil Daniels who carved out their early careers together in gritty British reality films Scum and Quadraphenia J. Meade Falkner&#39;s novel, on which this outing is based, was once a perennial favourite along among such classic family adventures as Treasure Island and Robinson Crusoe. The 1956 movie deviated a long way from the original storyline and it took until 1984 for the three hour TV miniseries to do it any justice on screen. This included filming at the genuine castle at Carisbrooke featured in the book.This latest version has less time to fill out detail, but has no than many feature films have managed to portray novels of similar length. The result is, however, a journey that moves though each part of the plot like a box ticking exercise to moved all too (implausibly) fast. The character development was shallow and, alongside the mediocre performances, left me with no feeling of empathy. Not all of me puts the blame on the acting though. The role taken on by Winstone is easily suited to his type cast manner and Aneurin Barnard is believable. I think the real problem for me was in the screenplay itself and the inane dialogue made available to the players. An underwhelming, but honest, four out of ten for me