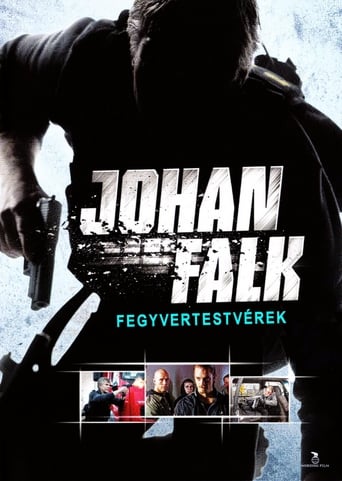 John Falk is on a routine mission with the Gothenburg police special unit GSI. With the help of a Norwegian undercover police and a civilian infiltrator in one of Gothenburg's heaviest criminal gangs, the GSI are trying buy six assault rifles and thus get them off the street. But suddenly everything changes when a new unknown player suddenly and immediately wants to buy not only those weapons but even more, including armor-piercing shells.GSI realizes that this can not be any ordinary robbers. Someone will start a war on the streets of Gothenburg. At the same time as the situation gets more and more complicated for John Falk's infiltrator Frank Wagner when the leader of the gang he infiltrated realize that one of his own leaking to the police .

AniInterview Sorry, this movie sucks
Rosie Searle It's the kind of movie you'll want to see a second time with someone who hasn't seen it yet, to remember what it was like to watch it for the first time.
Marva It is an exhilarating, distressing, funny and profound film, with one of the more memorable film scores in years,
Haven Kaycee It is encouraging that the film ends so strongly.Otherwise, it wouldn't have been a particularly memorable film
Enchorde Recap: Johan Falk is still attached to GSI and his contact in the streets &quot;Lisa&quot; is still giving him information. This time it is a major weapons deal that is about to go down. And at the same time Lisa wants out. Johan can certainly understand him but he needs him now more than ever. No one makes that kind of deal without planning going to war. At the same time Johan&#39;s own relationship is growing thin… Comments: Even if the movies is at full length, it almost has a feeling of series, especially if you watch the different movies close in time. The stories is not depending on each other but still closely connected, so it helps to watch them in the right order.The style is naturally also very similar. It is a movie that emphasizes more on a story driven thriller than action. The reasoning behind that is good, as the competence and resources for more special effects just isn&#39;t there. Instead they have become pretty good at what they do, to let the story do the work.If you have watched and enjoyed the previous ones, you&#39;ll most likely enjoy this too, even if it is only more of the same.6/10
MovieSwede This sequel works better then the first movie GSI. Its an easier narrative and also has more suspense. The action is also better directed/written then it was in GSI. As downside it doesn&#39;t work completely on its own but must be viewed after GSI. It also isn&#39;t as well-made as the the 3 original Johan Falck movies. It does lack the the end twist Anders Nilsson successfully created in Executive Protection and The Third Wave.But this is a fresh alternative (and better) to other Swedish police movies (Beck and Wallander) That makes me want to see the rest of the series.It also feels a lot more realistic then most other police movies. And Joel Kinnaman works very good for the movie, as does the rest of the cast. Highly recommended.
Tord S Eriksson Vapenbröder (Brothers in Arms) is a made-for-TV follow up on Anders Nilsson&#39;s &#39;GSI - Gruppen för Särskilda Insatser&#39; made-for-theaters film that also will be released this year. As usual Johan Falk is the lead - played very efficiently by Jacob Eklund, also as usual. It is about the same group of villains and police men, in the same town, and circumstances, but this time the villains been hired as providers of vehicles and heavy arms, for a group of Serbian military, who plan to make a prison-break, before the detainee is flown off to Haag and the International War Crimes Tribunal there. If we saw little of Johan&#39;s family in GSI, they are even more distant here, while the role for Patrik (Mikael Tornving) becomes more and more complex - he wants out, as before, but this huge arms deal worries the head of police a lot, so he&#39;s pressured a lot to keep on being their foremost informer. To me this film works better than &#39;GSI&#39;, even if the copy I saw hadn&#39;t even been finished (no rolling texts, sub-titles, et cetera), nor was it the best copy you could wish for! We were, in the private screening, told that there will be more to come - I&#39;d enjoy that!