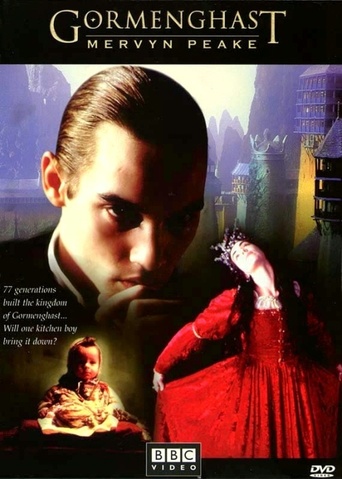 A four-episode television serial based on the Gormenghast series by Mervyn Peake. It was produced and broadcast by the BBC. Gormenghast is an ancient city-state which primarily consists of a rambling and crumbling castle. The narrative, based on the first two of the three Gormenghast novels by Mervyn Peake, begins with the birth of a son, Titus, to the 76th Earl, Sepulchrave Groan, and Countess Gertrude. This mismatched pair (he'd prefer the melancholy privacy of his library; she'd prefer the company of her menagerie of cats and birds) also have a teenaged daughter, Fuchsia, who resents her new brother but comes to love him dearly. Simultaneously, a young kitchen apprentice, Steerpike, takes advantage of an altercation between head cook Swelter and the Earl's manservant, Mr. Flay, and escapes from the kitchens. Gormenghast is rigidly feudal in structure, but Steerpike has ambitions.